Grant and I recently got together again to assemble a new episode of INTO THE WEIRD. It was hard going at first, as we had to sift through metaphorical body parts, do a bit of metaphorical grave robbing, and sew a bundle of nerves together in order to create this misshapen mockery of a show, but we managed it. For those of you who have already listened, we hope you found something in it to tickle your fancy or, at the very least, provide some rage-fuel that would prompt a response. Even if your impulse is to vilify us, at least it counts as feedback. Seriously, we’ll take anything we can get.

But for you hardcore weirdos out there who are of like minds and wish to delve deeper into what we discussed, I’ve included a bit of stuffing to go with the turkey. Below are some images from VAMPIRE TALES #1, the ones that were the most striking and really focused our attention. And there’s a lot to focus on, trust me. The transparency of Marvel during the seventies to ape the Warren Magazines and use cheesecake to cater to a specific audience astounds no one at this point. But nowhere is it more evident than in this issue.

Before I commence with the pics, I would like to address some glaring errors on my part. Errors that crept up during recording and were the fault of my 12am brain jonesing on more than a little alcohol. For this I apologize.

First, I called Esteban Maroto a Filipino artist, when everyone (including me) knows he’s from SPAIN. This is not the first time this happened. I tend to confuse his name with that of the great Filipino master Nestor Redondo, whose art is by no means the same but seems to occupy the same (limited) space in my head. Again, apologies to the listeners for this one.

Next, I called The Kree “Krees.” Inexcusable. I wouldn’t hold it against anyone if they shoved a cosmic rod down my gullet at this point.

But enough temporizing! Here follows what you’ve been salivating for – the PICS.

First off, the cover –

And for those of you intent upon reading the entire mag, here’s what you’ll get.

Some of Pablo Marcos’ interiors. All that comes to mind is WOW

The next image shows Morbius’ first victim strolling along the streets of Los Angeles. My question is, why doesn’t she use her flight ring to get around? <wink wink Legion Fans take note!>

Below is an example of a definite no-no for both Grant and me – the ‘sexy dead lady’ trope so often found in the black and white horror mags. Yikes.

Morbius points out the symbol of the Satanic Red Cross tattooed on Carrie’s cheek. My favorite line here is “A cult, I guess you call it.” What else would you call it, Carrie? Still, this is the first of the CULT Storylines that Morbius tales are so well known for.

Ah, Madame Laera… a more outgoing and flashy version of DC’s Madame Xanadu. Grant likened her look to Pantha. Very apt, G. This is to be expected. He has a good eye for the ladies, especially of the hellish persuasion…

And here’s Pantha! Seriously, she could be Laera’s twin – 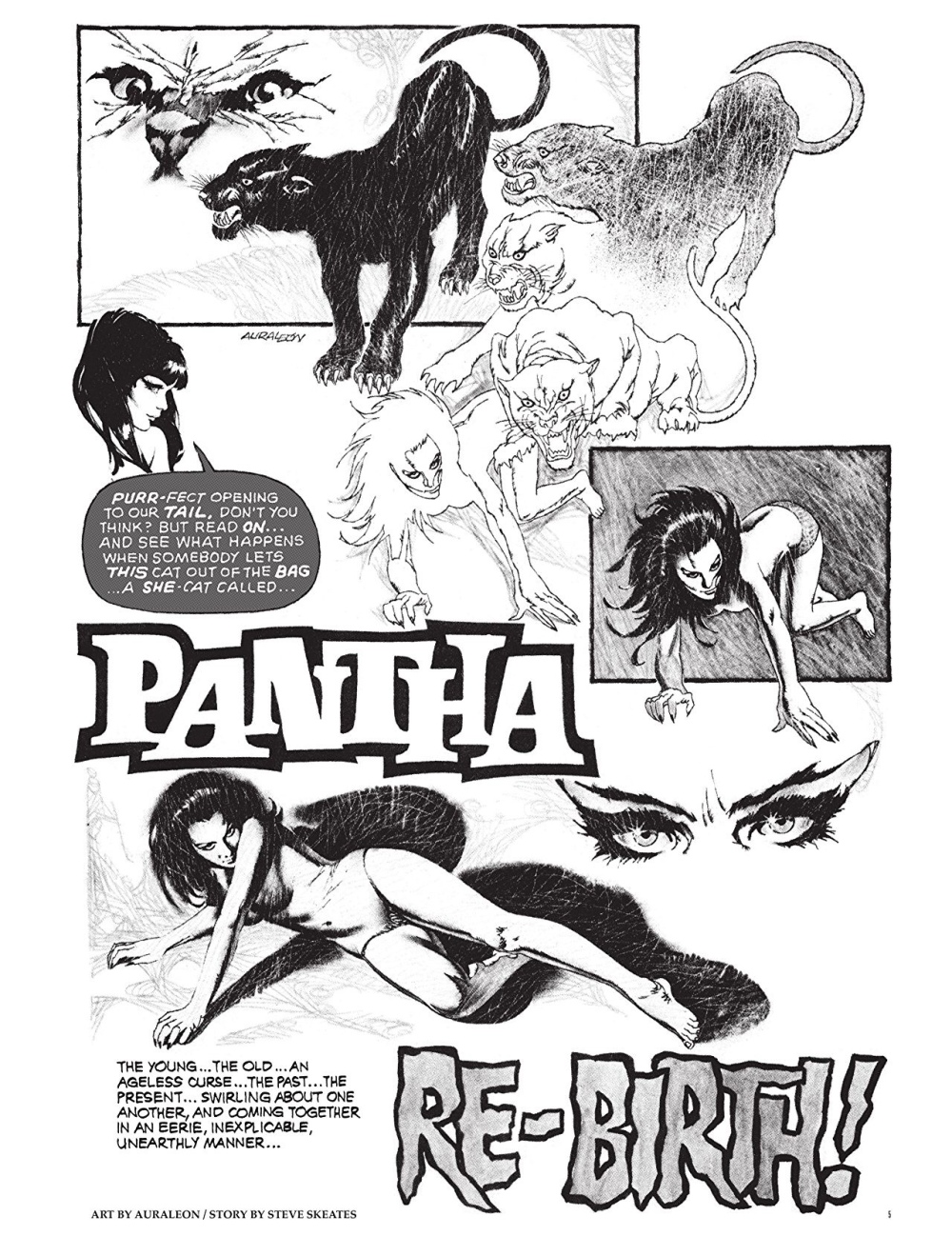 Now let’s get back to Morbius. Below we see that, tragically, all good things eventually come to an end. Case in point – the life of sweet Madame Laera, who did nothing more than try to help a monstrous client by looking into a crystal ball. The end result? She gets to be vampire chow. Nice, Morby. REEEEAL nice.

A tearful goodbye (WTF? Carrie, you’ve known this friend-murdering blood-junkie for literally an hour, MAX! What the hell?)

And finally, remember that panel I mentioned during the show, the one with the three-legged werewolf and his mournful howl?

And there you have it, Weirdos. Thanks for reading and (hopefully) enjoying our hefty helping of Satanic cheesecake.